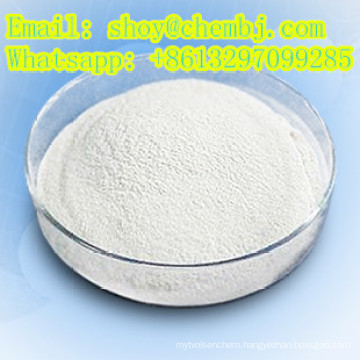 SPECIFICATIONS    Creatine is a naturally occurring Amino Acid (protein building block) found mainly in muscles. Fifty percent of creatine in our bodies is ingested through the foods we eat while the other 50% is made in the liver, kidney, and pancreas. Roughly one-third is in its free form as creatine, while the remainder is bound to phosphate and called creatine phosphate or phosphocreatine. During high-intensity, short-duration exercise, such as lifting weights or sprinting, phosphocreatine is broken down into creatine and phosphate. The energy released in this process is used to regenerate ATP, a major source of energy within the human body that drives a number of biological processes including muscle contraction and protein production.
Creatine supplements have gained much popularity in recent years, particularly among body builders and competitive athletes. The attraction of creatine, again, is that it may enhance athletic performance, particularly during high-intensity, short-duration sports (like high jumping and weight lifting).
However, not all human studies have confirmed this beneficial response and not every individual responds positively to creatine supplements. For example, people who tend to have naturally high stores of creatine in their muscles will not experience an energy-boosting effect from extra creatine. Preliminary clinical studies also suggest that creatine's ability to increase muscle mass and strength could hold special advantages for combating muscle weakness associated with various neuromuscular disorders.
Although not all clinical studies agree, some conducted in both animals and people have shown that creatine supplements improve strength and lean muscle mass during high-intensity, short-duration exercises (such as weight lifting). These positive effects were mainly seen in young people (roughly 20 years of age). Also, creatine along with resistance training has been reported to increase bone mineral density in elderly individuals, thereby reducing the risk for osteoporosis. Although it does not appear to improve physical endurance, there is some suggestion that speed for short periods of time may improve with use of creatine.
The use of creatine for athletic performance, however, is controversial and its use is restricted by several athletic organizations. The National Collegiate Athletic Association (NCAA), for example, prohibits member schools from giving creatine and other muscle building supplements to their athletes. The French Agency of Medical Security for Food (AFSSA) asserts that the use of creatine supplements is "against the spirit of sportsmanship and fair competition." The Healthy Competition Foundation, a nonprofit organization founded by the Blue Cross and Blue Shield Association to educate the public about the risks of performance-enhancing drugs in athletic competition, "urges abstinence from creatine use and reminds athletes, coaches, and parents that skill, dedication and hard work are the most important qualities for success in sports"
In addition, there is concern about athletes taking pure creatine supplements because of the potential for serious side effects such as damage to the kidneys in otherwise healthy people and the risk of inhibiting the body's natural formation of creatine. Some suggest that the solution is to only use creatine as part of a complex sport nutritional supplement that includes other exercise enhancing substances but this theory has yet to be tested.
Also of concern is the marketing of creatine containing supplements directly to teens. This age group is particularly vulnerable to the enticing but misleading claims about changing one's body shape with little effort. One survey conducted with college students found that teen athletes frequently exceed the recommended loading and maintenance doses of creatine. Meanwhile, neither safety nor effectiveness in those under 19 has ever been tested.
Contact us if you need more details on Creatine Anhydrous. We are ready to answer your questions on packaging, logistics, certification or any other aspects about Creatine Preparation、N-Amidinosarcosine. If these products fail to match your need, please contact us and we would like to provide relevant information.

Email to this supplier