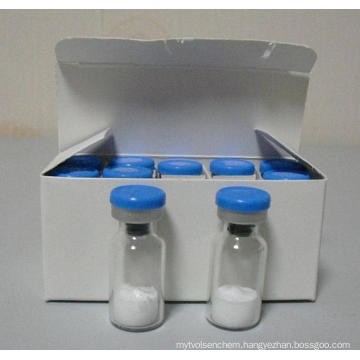 Product Description Model NO.: 140703-51-1 Customized: Non-Customized Suitable for: Body-Builder Purity: >99% Mf: C47h58n12o6 Appearance: White Powder Standard: Enterprise Standard Specification: 2mg/Vial HS Code: 2922199090 Powder: Yes Certification: ISO 9001 State: Solid CAS No.: 140703-51-1 MW: 887.0 Assay: 99% Trademark: Saichuang Origin: Wuhan, Hubei 99% raw peptides powder Hexarelin
Hexarelin (Hexarelin Acetate) is a synthetic hexapeptide in the growth factor family which stimulates the release of growth hormone (GH) and does not interfere with the body's ability to produce its own GH. Structurally, Hexarelin (Hexarelin Acetate) is similar in structure to GHRP-6 but without the appetite increase because of its inability to drastically increase Ghrelin levels which is responsible for the increased appetite and quicker gastric emptying. Hexarelin is a synthetic growth hormone secretagogue made from six amino acids. It contains powerful growth hormone releasing properties in the human body. Hexarelin in studies over a certain period has shown that it reduces visceral fat. Hexarelin (Hexarelin Acetate) like other Growth Hormone Releasing Peptides is most effective synergistically when administered with GHRH such as Sermorelin or Modified GRF 1-29. The increase of circulating GH through Hexarelin use causes levels of Insulin-Like Growth Factor (IGF-1) to rise in the liver. IGF-1 is the prime cause of muscle growth in response to GH stimulation. Users of IGF-1 typically experience increased strength and muscle mass, as well as a very pronounced fat loss.

The functionality of Hexarelin
Hexarelin (Hexarelin Acetate) is chemically designed as L-Histidyl-2-methyl-D-tryptophyl-L-alanyl-L-tryptophyl-D-phenylalanyl-L-lysinamide. Hexarelin (Hexarelin Acetate) is a potent GHRP-6 analog, whose structure (His-D-2-methyl-Trp-Ala-Trp-D-Phe-Lys-NH2) creates a greater stability than GHRP-6 due to a substituted (2 Me)Trp. Hexarelin has a half-life of about 70 min, longer than that of GHRP-6. Replacement of the naturally occurring L-amino acids for the D-configuration results in these longer half-lives.

Hexarelin has shown that it is highly stimulated at 30 minutes after being induced by rapid and sustained GH secretion. The pituitary gland produces GH in the brain, in children this hormone helps them to grow and in adults it helps to maintain muscle and burn fat. In one sixteen-week study, it has been shown that GH levels return to normal after stopping use after four weeks.


Contact us if you need more details on Hexarelin. We are ready to answer your questions on packaging, logistics, certification or any other aspects about Peptides、Peptide. If these products fail to match your need, please contact us and we would like to provide relevant information.

Email to this supplier